Following the lifting of restrictions by the Government, we would like to reassure all our patients that the way we interact with you will not be changing. All staff and consultants will continue to wear face coverings and maintain social distancing, and we require our patients and visitors to do the same, so that we are all protected.

Elliott Brock has explained the process he went through and how this has helped to change lives:

"After the donation in 2008, I received two of the lovely letters from the donor recipient, Vicky as well as a request to meet up with her and her family. At the time, I felt happy in the knowledge that all was well with Vicky's recovery and politely declined.

As the years passed, I did start to think of Vicky and was keen to know how she was getting on. We had just moved to Mersea and I hadn't got round to changing my address with Anthony Nolan so I was very lucky that the people who had moved into our old Colchester house kindly kept our mail as Vicky wrote to me just as I was about to write to her.

I first met Vicky in the flesh 4 years ago, shortly after my first son was born, and we have met up on a few occasions since. She had met my wife and our sons and I have met her parents.

Regarding the donation process / my story: I first joined the register while I was working in hospital, after seeing a poster requesting young male doners to join to help save people with bone cancer.

As I was working in a hospital it was relatively easy to get someone to take the blood sample required. Thankfully, all you have to do to join the register now is take a swab of your cheek and send it back to them which is obviously MUCH easier!!

They still prefer to have 16-30 year old males join the register as they have found transplants are more successful with this demographic. The great thing with running the marathon for Anthony Nolan is that - not only can people hopefully contribute financially (£10 pays for one of the aforementioned 'swab kits') but they can also ask young males they may know to join the register so even more people with bone cancers lives can be saved, just as I did with Vicky!

One day, about ten years after forgetting I had actually joined the register I had calls out of the blue from my GP; Anthony Nolan; the Blood service all trying to get hold of me as I was a 'strong match' for someone who needed a bone marrow transplant.

After further tests it transpired that I was a good match and, without hesitation,  agreed to proceed with the transplant.  I was working at Oaks Hospital in Colchester in the Physiotherapy Department.

The first thing that people say when I have donated bone marrow is 'that must have been painful '?! Besides having four daily injections into my stomach on the days leading up to the transplant (in order for me to produce more bone marrow cells), the procedure itself was largely painless. I even spent one of my 'recovery days' on the golf course!!!

The transplant itself was a bit like dialysis. They took blood out of one arm, ran it through a machine which collected the required cells, and then it was returned to my body. This lasted for four hours and , at the end of which , I was told they had collected enough cells for a 'young girl'.

Half a year later I received my first lovely letter from Vickys parents and this is when the magnitude of what I had done really hit home.  To hear what a dramatic improvement the transplant had made to this young girl - the fact her hair was growing back and she had returned to school was amazing to hear.

I received another heart warming letter the following Christmas which documented that Vicky continued to make great progress and was returning to sport and going on holiday once more.

Anthony Nolan was born a very sick boy, in Australia, in 1971, to his British mum, Shirley. He was given a very poor prognosis due to his form of bone cancer.

In 1973 Shirley heard about one of the first bone marrow transplants - which came from an unrelated donor, which had taken place in England.

She flew to England with Anthony to see if her son could be helped. Unfortunately his mum was not a suitable match for a transplant so the search for a donor began and this is where the bone marrow register first started, in 1974.

Unfortunately a match was never found for Anthony and he died in 1979. His brave mother continued to work tirelessly to grow the register and to stop more people/ children suffering the same terrible fate as her son.

As a parent I can only begin to think of the sheer desperation this 'needle in a haystack' search much have been for this poor mum, and the sadness of not being able to find a match for her son. The more people that can joint the register obviously increases the chances of more lives being saved, as I was lucky enough to do for Vicky." 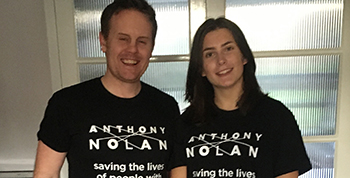